The Lady Facing the Wall

The Lady Facing the Wall

"Over time, her unbearable sorrow grew into a mournful obsession, covered in countless, lengthy hairs."
- The Lady Facing the Wall

The Lady Facing the Wall (F-01-18), known as Wall Gazer before you reach Observation Level 3, is a pale, naked woman with long, black hair that completely obscures her face. She kneels with her hands pressed against the wall and occasionally stretches her neck to inhuman lengths.

Qliphoth Counter reach 0. Her counter can decrease by 1 with the next methods:

When the ability is triggered, this will cause a 'jumpscare', with a female scream and distortion of the screen, dealing moderated

White Damage(18-24) to all the employees of the same department, even if they are out of the department.

Temperance Level 1 will panic at the end of work from turning back to face her, with her neck stretching to face them. At the start of the work, a 'Silent' speech bubble will appear next to her for a short moment.

The exact details of her origin are currently unknown, but it's mentioned in her last encyclopedia entry that a female subject is described with a similar behavior of the Abnormality after an interaction with her, because of knowing her name.

How and where the Abnormality was captured is still unknown, as well how she got her anomalous effects.

The Lady Facing the Wall responds to the four works in order of best to worst:

Insight.
Beware, even when

Attachment has the highest success rate(95%), it will decrease her Qliphoth Counter and might trigger her ability.

The Lady Facing the Wall's emotional state is divided into 3 sections:

Good. Completing 0-3 E Boxes will cause her to feel

Distressed, completing 4-7 will cause her to feel

Happy. Her usual waiting time after a task is around 10 seconds. Its

E-Boxes (14), emotional state and their

Information if the Abnormality can escape or not. plus her

The Lady Facing the Wall's containment

The Lady Facing the Wall's remark of silence

The Lady Facing the Wall, stretching her neck

The Lady Facing the Wall's old jumpscare. This image used to appear when she activated her ability, but was removed 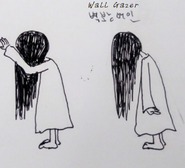