The Only Piece Of Rose In The World

"No one wants to see an essence. One day, when everyone lived in a such prejudicial world, a person showed up."
- Angela

The Little Prince (O-04-66-W), also known by its alternative name, Giant Mushroom, is an Abnormality taking the form of a tall mushroom-like entity of dark blue and purple colors. It possess a spherical base made of what seems to be heads with hollow holes as eyes and mouth. A dark stalk originates from the base to upwards, ending with a large blue cap on the top, a purple ring below it and with two branches, holding from several strings, dark blue hands with red fingers. A transparent light blue layer comes down from the cap. It makes metallic and stretching sounds when idle.

Its ability is "The Only Piece of Rose in The World". Employees who work constantly with The Little Prince, around 3 works, will get a random chance of being transformed into a big bipedal fungus being with large arms. In the process, The Little Prince will show another form while mutating the employee, covering the vision of the room with a mist, along with a child's laughter, and return back to normal after a moment. After the mutation, the creature, also known as The Little Prince-1; will get out of the containment room, infecting the floor of the hallway with fungus of its same matter and attacking any employees in sight, ignoring other Abnormalities. The creature tends to stay in the hallway. Employees in the same room as the creature with the floor covered in fungus, will start to receive constant weak Psychological Damage, and if they remain in the infected room for too long or their mental gauge is depleted by the attack, they will transform in a smaller and weaker version of the creature, named The Little Prince-2, who act similar to the first entity but they can't infect rooms by themselves or infect other employees, and will roam around the facility.

When The Little Prince-1 is defeated, the constant Psychological Damage disappears from the room. Secondary entities are independent of the first one and will still attack nearby employees until all of them are suppressed.

If The Little Prince's mood gauge is depleted, it will show a warning message and possess a random employee to come to its containment room, to be mutated once it enters to the room and increase its mood for a small amount. The player can click several times on the possessed employee, identifiable by a light blue cloud around their head, to slow the employee until the possession disappears, similar to Red Shoes. In case of releasing the employee, The Little Prince will try to possess again other employee if its mood doesn't increases again.

The Little Prince is assumed to be extraterrestrial due to being mentioned in its encyclopedia entries. Where it was found or how it arrived to the facility is unknown like the rest of its origin.

The Little Prince likes Consensus, Amusement and Violence, is neutral against Nutrition and hates Cleanliness work.

Employee Under The Spell effect 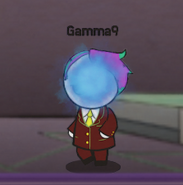 An clerk possessed by The Little Prince

The Little Prince's alternative form and employee being mutated

The Little Prince with -1 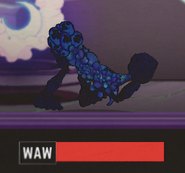 The Little Prince-2. This is a smaller version of -1

The Little Prince-1 in a infected hallway with some employees
Add a photo to this gallery
Retrieved from "https://lobotomycorp.fandom.com/wiki/The_Little_Prince_(Legacy)?oldid=13676"
Community content is available under CC-BY-SA unless otherwise noted.