The Mountain of Smiling Bodies

The Mountain of Smiling Bodies

ALEPH
This Abnormality is Capable of Breach

"The smiling faces are unfamiliar yet sorrowful."
- The Mountain of Smiling Bodies' Entry

The Mountain of Smiling Bodies (T-01-75) is an Abnormality taking the form of a big black spherical mass, encrusted with different parts and debris. It possess a big mouth with visible teeth with some tips covered on blood; and has 2 limbs to support itself. Part of its body is covered with white masks with twisted expressions, all with two black eyes and a mouth.

Qliphoth Counter reaches 0. It will decrease by 1 when:

Its appearance changes when its

When the counter reaches 0, it will breach. When escaping the containment, its starts off with a small amount of

Movement Speed. It will try to bite nearby employees, dealing a considerable amount of

Red Damage (7~11) while trying to eat them in the process. When it walks over a corpse, it will consume it and

heal itself. After 3 corpses were consumed, it will grow an 'extra' part, similar to itself and will be attached to one of its sides, as well recover and double its

Max HP. This can happen twice and once is done, the Abnormality will not be defeated by depleting its

HP only once. Once its

HP falls below half, if it has an extra part, the last addition will be removed and will return to full

HP, along with reducing its

Max HP by half.

The Abnormality will perform other attacks by the amount of extra parts that it possess at the moment:

If there are any employee's corpse on the floor, the Abnormality will move towards the dead bodies spot. If there are no dead bodies, it will wander around the entire facility without any specific pattern, usually turning back when reaching a door. It will remain breaching until suppressed or the day ends.

The Mountain of Smiling Bodies was formed after an accident with an Abnormality which left several casualties and, oddly, all the employees who died were in the same spot, with the corpses piled up on each other. Due to the graphic attack, a Sephirah allowed a request to postpone the collection of the bodies. Time passed and the corpses were still there, rotting quickly due to some of them having bad shape or health.

After a long time, the bodies fused into the Abnormality's current form. The fusion occurred when the corpses were 'smiling', sharing all their body parts, becoming sentient but not fully conscious, having only one objective in their mind: flesh. The Abnormality constantly seeks corpses to grow bigger and satisfy its hunger for more.

In the entries, the story seems to be told by an employee of the company, working in a department where the incident probably occurred, but it is sure that the Abnormality was contained there after its creation. Near the last entries, the employee tells that, likely the manager, did a well job in quarantine the department, with them being the only left in the department due to The Mountain of Smiling Bodies breaching. The employee eats a bomb and warns them to come and get rid of the other dead employees once the bomb goes off.

The Mountain of Smiling Bodies responds to the four works in order of best to worst:

The Mountain of Smiling Bodies's emotional state is divided into 3 sections:

Distressed, completing 11-20 will cause it to feel

E-Boxes (30), their emotional state and

"It's not like these kinds of happenings are uncommon here, but one day, dozens of employees were killed in an incident. The reason is the same as always. Something breaches, they attempt to stop it, then it leads to another breach... The one fortunate thing was that the department was sealed off before things could get any worse, so they all died in the same place. Literally, a mountain of bodies was formed. Obviously, no one wanted to clean up that mess.
Normally, it should have been taken care of within the day, but because the accident was just so horrific and everyone was so exhausted, the clean up was delayed with authorization from the department’s Sephirah. Don't ask me which department it was in, I don't remember all the details."

"When left out in the open, a corpse will begin to rot within a few hours. Most of the bodies that die here are damaged in one way or another, so they decay even faster. You probably don’t know it yet, but most of the employees here are rather skilled at cleaning up dead bodies. Tidying up over and over will make anyone an expert at it, whether you want to or not. Let’s say someone you were just talking to about dinner plans died horrifically. With your repeated experience to help you, you won’t be vomiting or running away at least."

"Whoops, I sidetracked a little there. Anyway, in normal circumstances, the mountain would have been removed quickly, but it remained in the department for quite a long time. So it decayed, melted, corroded, and broke down following the laws of nature."

"That's how its creation began, from the mountains of bodies. The dead gave life to something. Amazed yet? I've still got more to tell you. The dead fused with one another, all smiling. Sharing body parts, at least those that were still intact, they became each other's legs and mouths. That doesn't mean their consciousness has also been restored though. It only wants one thing: our flesh drenched in blood. When there’s an announcement of someone’s death, the first thing you should do is check if this thing’s quarantined. Once it gets a whiff of the scent, it will pursue us in an instant. The smiling faces are unfamiliar yet sorrowful. The more bodies it comes across, the more defined its shape becomes. And it is never satisfied.
I'm telling you all this because it's almost here. Accidents always happen in this place. Some may spare a bit of their time for a moment of silence, but most will turn away thinking, "Again?". At the very least, one thing that was done right is that the department’s been sealed off. I'm the only one left anyways. Did you learn anything from my story? What kind of lesson can be learned from a story as horrible as this, you ask? It's similar to most fairy tales. "Don't be lazy" is the lesson. When my voice ceases, come here and clean up your colleagues in exactly 3 minutes"

"Pretty soon I won't be able to keep talking. I'm about to swallow a large bomb. Time's running out. Blood is flowing all around here. I'm starting to see the smiling faces now... Something you don't see much of around here. Don't be surprised when you hear a loud explosion. Like I said, it's precisely 3 minutes. I'm sure a bomb this size will be able to suppress it. The last body it finds will be mine."

The Mountain of Smiling Bodies' containment 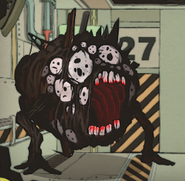 The Mountain of Smiling Bodies angry 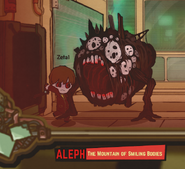 The Mountain of Smiling Bodies Breaching 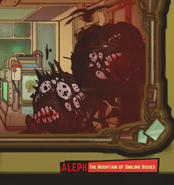