The Queen of Hatred

The Queen of Hatred

"In the name of Love and Justice~ Here comes Magical Girl!"
- The Queen of Hatred

The Queen of Hatred (O-01-04), also known by her previous name Magical Girl, is an Abnormality resembling a young, pale-skinned girl with 4 fingers. She has large, yellow stylized eyes, long hair with a pastel blue and purple gradient as coloration, with two strands curled away in the shape of antenna. She wears white tights, with pink accents, a pink, layered/pleated skirt, a pink shirt with white sleeves and a large pink ribbon on her chest to match. She has two wing like pieces on her shoulders and a pink and black heart clip in her hair. Beside her is a pink staff with a star adorned with wings at the end, its grip is striped with yellow and pink, and the bottom is tipped with a pale blue heart with a pink star in the center. The star at the end has a heart shaped hole in the center of it.

Her special ability will trigger under a few different circumstances, along with its

Qliphoth Counter dropping to 0. Her

Qliphoth Counter will decrease by 1 when getting a

Her state will change depending on the

Qliphoth Counter and have the following different effects:

The Queen of Hatred also possess two ways to breach:

She possesses a decent amount of

Movement Speed, levitating while moving.
When in a Passive Breach, she will teleport to a random location where there's another breaching Abnormality or hostile entity. In this form, she possesses 3 different attacks:

The Queen of Hatred shares her story with The King of Greed andThe Knight of Despair, all three being the 'Magical Girls' and mentioned to be sisters. She was one of the 'heroes' who wanted to protect the world, but due to her own obsession, she became unstable and even bipolar to some degree. The Queen of Hatred has shown to be more sentient than her sisters, as her entry mentions her ability to call the Emergency Response Department. She suffers from amnesia. While her short memory is acute, she's left with very few memories at all times, forgetting recent events and most breaches and changes in form.

Her obsession with justice changed her mind to protect the people from any 'bad guys'. For balance, there must be evil and good, and if there's no 'evil', she will fulfill that part by transforming herself into her alternative form and losing control of herself.

How she arrived in the facility and where she was found is still unknown.

The Queen of Hatred responds to the four works in order of best to worst:

The Queen of Hatred's emotional state is divided into 3 sections:

Good. Completing 0-8 PE Boxes will cause her to feel

Distressed, completing 9-15 will cause her to feel

Happy. Its usual waiting time after a task is around 15 seconds and her

E-Boxes (22), emotional state and their

Qliphoth counter (2). This include her defenses when breaching:

Unlocks the E.G.O. Gift 'In the Name of Love and Hate'.

Unlocks the E.G.O. Weapon and Suit 'In the Name of Love and Hate'.

Spoken during a Passive Breach[]

Encountering The King of Greed:

Encountering The Knight of Despair:

Suppression of The King of Greed:

Suppression of The Knight of Despair:

When shooting her laser:

The Queen of Hatred's containment 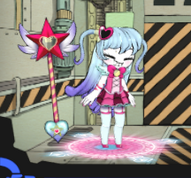 Idle Stance with an aura on the ground 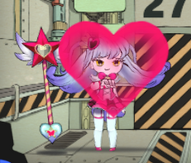 The Kiss animation when healing an employee who finished a work

The Queen of Hatred, helping during a breach, performing her basic star attack 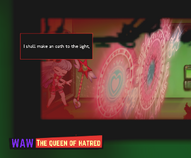 Ready to shoot the laser 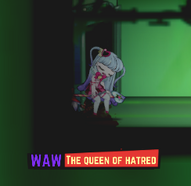 Resting after the laser attack 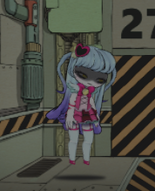 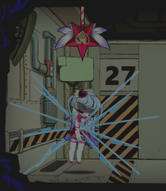 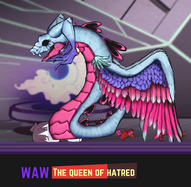 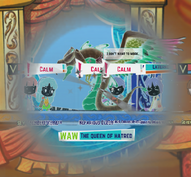 The Queen of Hatred falls

The Queen of Hatred defeated

The Queen of Hatred defeated animation