"From break and ruin, the most beautiful performance begins."
- The Silent Orchestra

The Silent Orchestra (T-01-31) is an Abnormality in the form of a group of white humanoids, with parts of them composed by musical notation such as eighth notes and various clefs. The conductor, which is the only entity in the containment room, is similar to a limbless mannequin. It is held up by a pole stabilized by a base, is dressed like the conductor of an orchestra, and has eighth note patterns on its head. It possesses hands, although they only appear when performing its Ability and in its Encyclopedia Picture. The Silent Orchestra in itself is actually the entire ensemble, and the other members only appear when the conductor is performing its ability during a breach.

Silent Orchestra's ability will trigger when its

Qliphoth Counter reaches 0. Getting a

Bad work result will decrease its counter by 1. When its counter is depleted, it will breach; Curtains will cover their Containment Unit after a period of time, before a second pair of curtains covers the player's screen for a short period. When the curtains open, The Silent Orchestra's conductor will have warped to the Main Room of its Department and perform a song. It will reveal two hands, one holding a baton, and begin to conduct the accompanying ensemble. The curtains will obscure important HUD information, including Qliphoth Meltdown and

HP, and the Symphony is composed of 4 movements and a Finale. As the song progress, notes will start to expand and more of the symphony's parts will appear seated near the conductor. The Silent Orchestra's defenses will vary during the movements, changing the melodies and gaining immunity to all Type of Damage except one. All the while, it will deal high

White Damage (30-40) to nearby employees, increasing its area of effect as it progresses. The further an employee is from the Silent Orchestra's first ring, the less damage they will take (e.g. someone inside of the first ring will take full damage, while someone standing in the elevator inside the outer third ring will only take 25% (1/4) damage). During breach, the player cannot change the speed of the game, and is only able to pause.

These are the vulnerabilities during the mentioned movements, while being immune to the other damage types:

For each of the first four movements, a new performer will appear at the start of each one. During the Finale, the entire band rises to a stand. As The Silent Orchestra's song comes to a close, the notes produced will expand quickly with a loud sound, and all the employees with less than half of their

Max SP will die, their heads exploding. At the end of the symphony, The Silent Orchestra will return to its containment room with an accompanying applause playing in the background.

Its origin is currently unknown, with the only piece of information being that it was a previous conductor of the corporation, mentioned in its Last Observation dialogue (Legacy).

The Silent Orchestra responds to the four works in order of best to worst:

The Silent Orchestra's emotional state is divided into 3 sections:

Good Completing 0-12 E Boxes will cause it to feel

Distressed, completing 13-18 will cause it to feel

E-Boxes (30), their emotional state and its

Qliphoth Counter (2). All of its defenses are marked as 'Unspecified', due to them changing each time during a breach.

"An abnormality that loves art and tries to get the entire company to listen to its music.
<Excerpt from an Encyclopedia>
The conductor not only corrects musical errors, but is also responsible for creating the best ensemble and taking command of the music. A conductor's skill can be determined within 5 minutes at the podium. The moment the conductor opens the score, the performers read the conductor's eyes, actions, and aura to see if the person is worthy to lead them. Without the understanding and harmony between them, the macroscopic significance contained in the score cannot be expressed. Therefore, an outstanding degree of influence, leadership, and eloquence are essential qualities for a conductor to have...(Omitted)"

"<1st Movement: Calm and Slow(Adagio)>
The conductor begins to direct the apocalypse."

"<Movements 2: Cheerful and Fast(Sostenuto)>
Employees start to forget everything and show fervent adoration toward the symphony. The emotion soon turns into internal insanity, driving them to attack anyone near them. "

The orchestra gives impetus to the music, bringing the entire department to its demise."

When all the performers have gathered, the music that no one can hear but everyone can listen to begins."

"<Finale: Con Fuoco, Ma Non Troppo>
The music shall perforate your entire being." 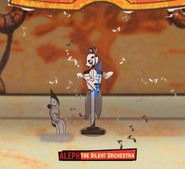 Breaching and starting the symphony 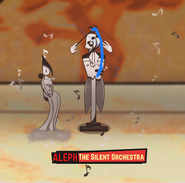 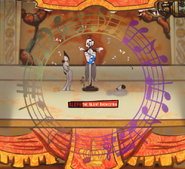 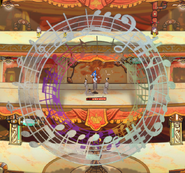 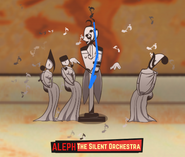 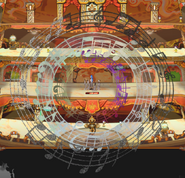 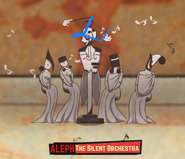 The Fourth and last Member 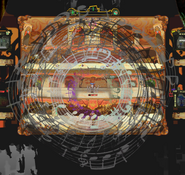 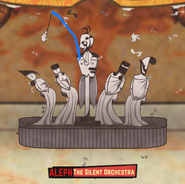 The full band raised on a stage

Silent Orchestra's postcard from the Artbook