The Silent Orchestra (T-01-55-A) is an Abnormality in the form of a group of white humanoids, with parts of them composed by musical notation such as eighth notes and various clefs. The conductor, which is the only one in the containment room, is similar to a limbless mannequin. It is held up by a pole stabilized by a base, is dressed like the conductor of an Orchestra, and has eighth note patterns on its head. It possesses hands, however they only appear when performing its Ability and in its Encyclopedia Picture. The Silent Orchestra in itself is actually the entire ensemble, and the other members of The Silent Orchestra only appear when the conductor is performing its ability during an escape.

Silent Orchestra's ability is "Silent Symphony No. 19", or as mentioned in its entries, ''The song of the Apocalypse". The performance is triggered if it remains in a good or bad mood for a certain amount of time. If its mood reaches either mood, curtains will slowly appear outside its containment room. Once the curtains are completely visible, they will cover its room. A second pair of curtains will cover the screen of the player for a short amount of time. When the curtains are opened, The Silent Orchestra's conductor will have warped to the main department room to perform a song. It will reveal two hands, one holding a baton, and begin to conduct the accompanying ensemble.

The Symphony is composed by 4 movements and a Finale. As the song progresses, more of the symphony's parts will appear seated near the conductor.

At the start of the first movement, the employees in the main department room suffer constant psychological damage, which will be increased by each movement. If their mental gauge is completely depleted by this attack, the employees will remain silent and 'Out of Control'. In the second movement, the conductor of The Silent Orchestra will become immune to melee attacks, replenish its HP and the psychological damage is extended to any employee in the hallways near the main room. The third movement will make a noise, which causes any employees under the effect of the music to attack other nearby employees. The conductor becomes immune to ranged attacks during this movement but loses it's immunity to melee attacks. For the fourth movement, the psychological damage extends to the entire department and the last performer appears. The entire band rises in the stands. During the Finale, the notes expand quickly with a loud sound and all the employees under half mental gauge will die, with their heads exploding. At the end of the symphony, The Silent Orchestra will return to it's containment room with the sound of applause in the background.

If The Silent Orchestra is subdued or when it ends the performance, it will drain all the energy collected of the facility, dropping it back to 0.

Its origin is currently unknown, but is known that it was a previous conductor of the corporation, mentioned in its Last Observation dialogue.

The Silent Orchestra respond best to amusement, likes cleanliness, hates nutrition and consensus, and is neutral towards violence. Due to its ability being triggered when either happy or upset, it is recommended to keep it neutral by performing violence on it.

Like all Abnormalities, its energy output changes depending on its mood. It produces the most energy when neutral and drains a large amount of energy when distressed or happy. The Silent Orchestra's mood will fluctuate different depending of which current section of its mood: It will increase or decrease its mood overtime depending if is mood gauge is higher than the half of the neutral mood or lower than the half.

The Silent Orchestra in its happy mood. Curtains start to become visible 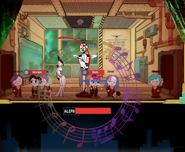 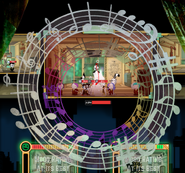 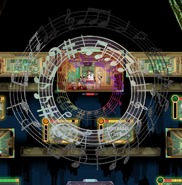 Third Movement. Employees will start to attack to each other 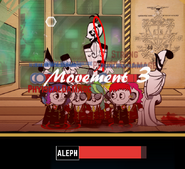 Third Movement's effect on the clerks 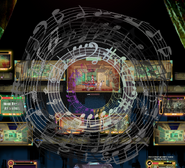 After Finale. Those who died have musical notes dropping from their necks (Lights off because of Big Bird)