"The snow is steadily melting... Perhaps because spring is coming, or it might be the palace collapsing."
- The Snow Queen

The Snow Queen (F-01-37) is a humanoid Abnormality, taking the appearance of a woman whose skin appears to be frozen, with a disembodied head and no neck. A long, ornamented crown of blue and white plates, with a snowflake pattern adorning the center, along with a pair of black antlers. She is wearing a long white robe with a dark dress. She has large icicle shoulder pads, resembling snowflakes. Her gray hands are holding an upside down sword with a light blue blade, with a gray handle and blue gem.

It is constantly snowing in her containment room, with the floor enveloped in white mist. There is a sound of cold wind in a snowstorm.

The ability of The Snow Queen might trigger when getting a

Normal result or very likely to happen when getting a

Bad result. When the condition is met, The Snow Queen will hit the ground with the tip of her sword, throwing a piece of glass to the employee's torso. The glass shard will disappear at the end of the day.

If an employee with a glass shard triggers her ability again, she will freeze the employee in a block of ice, putting them 'Out of Control'. The next work will be a duel against The Snow Queen and the employee assigned to work with her will be the duelist. The Duel's success is dependent on the agents Fortitude level. With high levels of

Fortitude, they will have higher chances of winning (level 1 = 10%; level 2 = 30%; level 3 = 50%; level 4 = 80%; level 5 = 100%). When the employee enters the containment room, the combat will start. After some time, the duel will end with a sword being taken off by the other. Depending on who the winner is, a celebration theme or dark music plays and one of the next results will occur:

If the day ends without rescuing the frozen employee, they will die.

An employee wearing the EGO Suit from The Firebird will instantly be killed upon entering The Snow Queen's containment unit.

It is assumed that the story follows the same or similar events from the original tale: The Snow Queen.

The story starts with Kai and Gerda. When a fairy broke a magic mirror, causing the pieces of the mirror to be scattered into everyone's hearts, Kai saw things that he didn't need or want to see. He then left the village he stayed in his entire life. During a blizzard, he met the Snow Queen. From him wanting to know the world, more than what he already knew, he was led to her Snow Palace, where she froze his heart so he wouldn't feel the cold.

Gerda, the girl who hadn't gotten a shard of the mirror in her heart, went after Kai to rescue him from the Snow Queen. After suffering through an "agonizing" journey, she reached the palace and rescued Kai. The warmth from the season shifting to Spring started melting the palace. The mirror shard in Kai's heart was melted by the heat as well. They left where the palace once was, leaving The Snow Queen all alone.

The Snow Queen responds to the four works in order of best to worst:

The Snow Queen's emotional state is divided into 3 sections:

Distressed, completing 8-13 will cause it to feel

E-Boxes (18) and their emotional state.

Its E.G.O. Gift is only obtainable by winning a duel against the Abnormality.

About to duel with The Snow Queen[]

Dueling with The Snow Queen[] 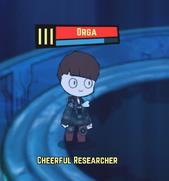 Glass Shard on an employee

Ice Prison with an employee 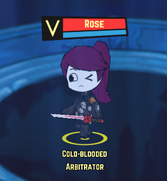 The employee who will fight The Snow Queen

When the employee wins