"Ices are melting... We don't know if it's because spring is coming or the palace is crumbling."
- Angela

The Snow Queen (F-01-37-H) is a humanoid Abnormality, taking the appearance of a woman whose skin appears to be frozen or cold, with a disembodied head, with a long and ornamented crown of blue and white plates, with a snowflake pattern adorning the center, along with a pair of black or darkly shaded antlers. She doesn't have a neck. She is wearing a long white robe with a dark dress. She has large icicle shoulder pads, resembling the shape of snowflakes. With her gray hands, she is holding an upside down sword of a light blue blade, with a gray handle and a blue gem.

Her containment room is constantly snowing from the ceiling, with the floor covered with a low white mist, and with the sound of the cold wind in a snowstorm.

Her special ability is "Third Kiss", which will likely to activate when an employee finishes a work with her. When that condition happens, if is the first time that the employee works with her, she will hit with the tip of her sword the floor, and a glass shard will embed to the employee's chest before exiting the containment unit. The shard increases the Max HP and Mental Gauge of the employee, but is not considered a trait. The glass shard will disappear at the end of the day.

When an employee who already performed a work with Snow Queen once comes again to finish another work with her, the employee will get imprisoned in a block of ice. When holding a frozen employee in the containment room, The Snow Queen will start to drop her mood faster and a special work will become available: 'Duel.' The player can send another employee to duel against Snow Queen to retrieve the frozen agent. When the employee who will challenge her arrives at her containment room, the vision will be blocked by two big wooden gates, with the working bar progressing. The winner of the duel depends of the employee stats, increasing the success of winning when the employee is of higher level and stats. The agent will lose if their HP is depleted.

If Snow Queen wins, the agent will get killed, along with the other frozen employee.

Additionally, The Snow Queen will freeze the Energy Bar when her mood is depleted when holding a frozen employee in her containment unit. With the bar frozen, no more energy can be added or subtracted from the bar through energy production with moods, but producing energy with works can still add energy regardless; and the player can't enter in the Refinement Process while this is in effect. The frozen energy bar will break after the conclusion of a duel.

Is assumed that the story follows the same or similar events from the original tale: The Snow Queen.

The story starts with Kai and Gerda. When a fairy broke a magic mirror, causing the pieces of the mirror to be scattered into everyone's hearts, Kai saw things that he didn't need or want to see. He then left the village he stayed his entire life in. During a blizzard, he met the Snow Queen. From his wanting to know the world more than what he already knew, he was lead to her Snow Palace, where she froze his heart so he wouldn't feel the cold.

Gerda, the girl who hadn't gotten a shard of the mirror in her heart, went after Kai to rescue him from the Snow Queen. After suffering through an "agonizing" journey, she reached the palace and rescued Kai. The warmth from the season shifting to Spring started melting the palace. The mirror shard in Kai's heart was melted by the heat as well. They left where the palace once was, leaving The Snow Queen all alone.

It can be assumed that The Snow Queen died from cutting her own wrists, and somehow ending up in a bathtub (this being stated in her final encyclopedia entry.) She was then put in a "cryo-coffin."

Later, A decided to 'revive' her with a "machine" that he detests, but realizing soon after said action is a mistake.

The relationship of The Snow Queen with A is currently unknown.

The Snow Queen likes Consensus, is neutral against Nutrition, Cleanliness and Amusement, and hates Violence work.

The Snow Queen is usually best left alone until you start to acquire higher level agents. Once you have a higher level agent; About Level 3 should be able to handle the Compound damage. Have that agent do Consensus with The Snow Queen One Time at the start of the day. Doing this sets Snow Queen at a higher mood, keeping her from draining energy for a majority of the day. This allows any other works for her to be set on the back burner, allowing agents to focus on other abnormalities in the department.

If you have multiple agents who can do Consensus with her, take time send them in (only once) so they can get the benefits of The Snow Queen's ability. 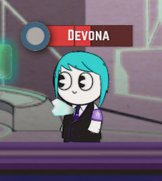 Glass Shard on an employee

Ice Prison with an employee

When the employee wins