"This is a forest full of hearts. No matter how many he cuts down, the forest still remains dense."
- Warm-Hearted Woodsman's Entry

Warm-Hearted Woodsman (F-05-32) is a large mechanical humanoid entity made of metal with some parts covered in moss. It possesses a head similar to a knight's helmet, has an empty open cavity covered in blood, and is always holding a large gray axe with one of its hands.

Its special ability is activated when its

Qliphoth Counter reaches 0. It can decrease by 1 when a

Unlike other Abnormalities, it will not breach once the counter reaches 0. The next employee who enters its containment room will be killed by the Abnormality. It will then shove the corpse of the employee into its chest, creating a heart-like organ in it. Afterwards, it will breach.

When breaching, the Abnormality has slow

Red Damage with a normal Attack Speed. Sometimes, it will charge its axe and attack its targets rapidly 6 times, each attack dealing (3~4)

Red Damage, with the final attack slamming the axe on the target and dealing great (15~20)

Red Damage. If it walks on a corpse of an employee, it will pick up the remains and add them to its 'heart,'

HP. It will continue breaching until the day ends or it is suppressed.

The Warm-Hearted Woodsman took the role of the Tin Man, called the Tin Woodsman, of the story of The Wizard of Oz, along with the other characters: Dorothy, the Scarecrow and the Cowardly Lion. Due to them being incomplete, they embarked into a journey together to find the wizard and make their wishes true.

When they found the wizard, a few of the characters got what they wanted, to some degree of satisfaction, except for the Tin Woodsman, who received a 'worthless' lead heart. Trying to convince the woodsman that its wish came true, the wizard told it that it was only a machine, and that hearts are for humans. The lead heart was too hard and cold for the Woodsman. It became sad that it could not see its friends.

Following this, the Woodsman started to cut down people instead of trees, taking out their hearts and adding them to its own in the open cavity in its chest.

At some point, the Woodsman ended up captured by the Corporation, alongside the Scarecrow.

Warm-Hearted Woodsman responds to the four works in order of best to worst:

Qliphoth Counter (1). This includes its defenses when breaching:

Effect when an employee enters with the Qliphoth counter at 0 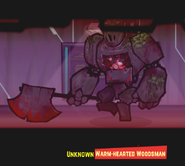 Attacking an employee with its secondary attack, at the final move

Adding a corpse to its 'hearts'