"However, the world is more than simply warmth and light."
- Abnormality Log

WAW Tool Abnormality taking the form of a white pendant, the half part of a sphere with a small black dot on its more spherical part.

Its counterpart is Yin, its other dark half of the complete pendant.

White Defense will change to 0.1 (Resistant). This effect will not occur if Yin is not in the facility already. If Yin was previously picked, Yang will be the only abnormality you are able to select the next day.

When Yang is equipped for 30 or more seconds, Yin's

Qliphoth Counter will drop by 1. Unlike other tools, when Yin breaches, Yang will transform in its counterpart and breach along it, removing itself from the equipped employee.

When breaching, Yang will take the form of a white fish-like creature with a single light blue eye. It possesses 800

moves slowly across the facility. When an employee passes by, it will let out a small short-ranged wave around itself that heals a portion of

SP of the employees in the area. When Yang takes damage from an attack, it will deal the same amount of damage back to the attacker in form of

White Damage. Its defenses are Normal (1.0) against all the damage types. The Abnormality will try to reach for its other half, Yin, trying to touch it. Yang is easy to suppress but will turn into its pendant form for a while after its

HP is depleted, unable to be attacked, and will transform back into its fish form, back with full

HP, and will continue to do so until Yin is suppressed as well.

Upon meeting with Yin, they will unite and form the Yin Yang symbol. Soon after, a gigantic Eastern dragon-like creature will appear from the top of the facility, moving across it at fast speed, with its direction indicated by the Yin-Yang symbol. It will reverse the percentage of all the entities'

SP as well if the entity is an employee) on its way, in form of

Black Damage, and will reverse the

It is important to note that the combined ability of Yin and Yang will not work on the following Abnormalities once breached:

The origin of Yang started with their story, along with its counterpart, Yin, speaking of how their effects only work because they were made to be like that, that their creator made them together and that both entities question their existence without having their other half. Called sometimes the 'Pendant of Good' by employees, the two fragments were intended to be together. They were initially together in their past and the story tells of how the 2 carps or fragments meet, finally uniting.

How the pendant fragments arrived into the facility are unknown. 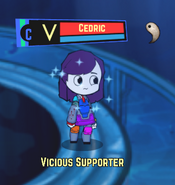 An employee equipped with the Abnormality 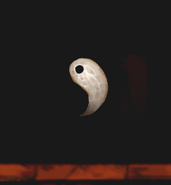 After being suppressed, with Yin still breaching 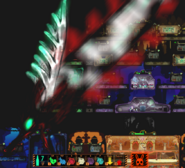